A Lesson On Resiliency and A Parent's Nightmare- Part One

"Let's draw what we feel exemplifies a resilient person" said the instructor of the FSI seminar #XYZ. Another instructor handed out a big poster board and a handful of markers to each table. The room was filled with approx. 50 parents all hoping to raise resilient children in this very cool but very complex Foreign Service (FS) lifestyle. We had all signed up hoping to hear we were giving our kids the best of all possibilities -a first person world view coupled with the high achieving international school/dual language lifestyle. Most of the parents had younger children and had already experienced a few foreign tours. The instructors explained that each table/group had a about 20 minutes to talk about it and draw something that represented our table's idea of a "resilient person." Most groups drew something that showed a figure being unusually flexible and happy. One group's poster was of a stick figure that was jumping over "life hurdles." The stick person had a glass of fresh water in its hand like a runner's baton. I think it had something to do with our kids having an understanding and take on global issues. Also, the drawing had an orange sun beaming from the upper right corner, representing an "optimistic attitude." All were well thought out and you could tell everyone was sort of on the same wavelength. And then there was this one... 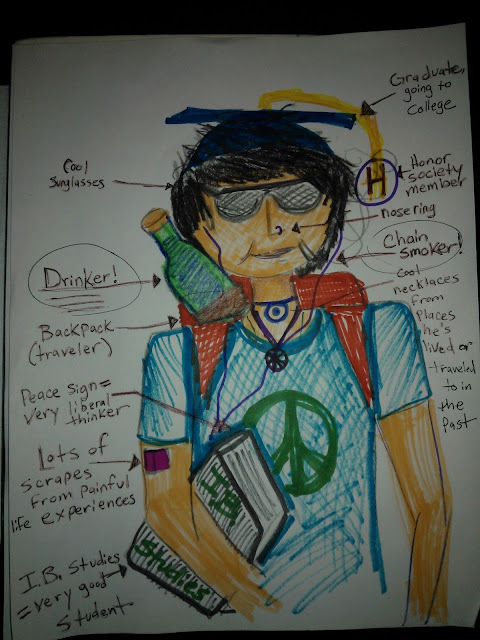 Yep! This was the one from my group's table (actually, it's a very close recreation)-

Hannah (our poster artist) was shy at first about joining the discussion about resiliency but when she realized that the instructor was basically describing the cool FS kids she has gotten to know, she was suddenly our portal to FS realities. Once she drew the "wine in the backpack" (see above) one of the ladies in our group actually validated that and said she hoped her daughter would know how to enjoy wine one day. Hannah drew what she felt was the true resilient FS kid- according to her experience. So, blame me, the party-pooper extraordinaire who forced my 18 yr old, Sr. in high school daughter to join me (MUCH to her chagrin) for this particular seminar. But, because she is a strong young lady she not only contributed most of the "resilient kid" info, she also volunteered to stand up and present the poster for our group (and afterwards received a supportive round of applause)! One lady at our table seemed very uncomfortable with the wine and smoking thing. She has younger kids and honestly, I completely understood and share her feelings of concern. I didn't want to make FS kids synonymous with addictive vices, either! But, Hannah's dose of reality for the parents in the room meant that all of us dorks who had hoped to be told that "resilient kid" meant patriotic, centered kids who went out- saw the world and came home wise, inspired and fully bilingual- were in for a little "awakening".

The truth is Hannah knows several of the older FS kids due to living at Oakwood and going to a Falls Church high school known for it's prestigious IB program. She is new to the school and we are all new to the Foreign Service but Hannah has been able to pick up on some of the "between the lines" stuff I would have never noticed just looking at the group of kids who all huddle in the darkness waiting for the bus each morning. So, the truth? A lot, or most, of these kids party, apparently. For weeks she had been telling me how different and how "grown up" the experienced FS kids seem, seniors especially. "Grown-up" meaning (represented in the drawing above) drinking maturely, NOT kids getting drunk and acting stupid on kool-aid and vodka, we're talking about savvy, cool kids who are years beyond that- they know the difference between a Shiraz and a Cab. Honestly, I sort of figured she was over stating it, that is until the second half of the seminar, which was a Q & A session that included a live panel of 3 young adults- just out of college- FS kids. Their part of the presentation was meant to give us all a chance to ask questions and get a deeper understanding of their FS experiences. They were asked a lot of good questions by the parents in the room. There was a lot of food for thought after that seminar. It's stuff like this live panel that is probably the number one reason I love these seminars. I can't remember the question that prompted this but, one of the panelists in particular mentioned and  validated the "wine in the backpack" thing, explaining that most kids had a driver and that drinking was "okay and the norm" because you didn't have to worry about driving yourself home after a night out and since there was no real legal drinking age in most these countries it was sort of what everyone did (NOT what I wanted to hear being from an AA family, myself). So, I can safely assume that drinking and FS kids are sort of a "thing?" Okay... I'm more than a little concerned about this as it pertains to my three kids.

So... how exactly did partying and whatever else become part of the "resiliency" seminar for me? I'm still not sure, but according to the information they gave us, resiliency can be learned by experiencing things (FS kids experience 80% more loss, moving, etc. than the average American kid) and we FS parents can encourage healthy ways of working through and coping with those experiences by teaching our kids how best to deal with them. But how? I would LOVE to have some foreign post experienced parents who have older kids who have dealt with this to chime in and leave a comment- Please! (or email me offline if you are more comfortable with that)

When a crisis happens, another move, another best friend moves away, a scary report from the RSO (do the kids deal with that actually?) and last but not least- returning to the US, which the panelists all agreed was much more difficult for them than living at foreign posts, how do parents promote resiliency? In my experience/opinion it usually boils down to "our kids will do as we do" meaning we are teaching them by modeling behavior and habits whether we realize it or not. We all need healthy habits of dealing with stress before the crisis hits, but we don't really grow those kinds of muscles until the crisis hits, right?

Sean and I try but we miss the mark and usually take the long way around. We pray and then forget that we just asked God to help us, then resume our futile attempts at controlling the situation.
It's difficult!  So, yeah, I'm not at all surprised that the kids my daughter has deemed resilient are martini and wine drinkers at 17 or 18- because chances are that enjoying a nip at dinner is what their parents do to chill out after a long day. I'm not judging. Trust me, I am totally in the same boat. So, no- I don't think it is just an effect of having a driver and loose laws on alcohol- but that CERTAINLY adds to the probability of them drinking at a young age. So, Hannah's cool FS kid/resilient person poster at the seminar was not too far from reality at all. Again, I would love to talk to parents who are dealing with these things out in the field! There has to be some good examples out there!!!!! I've heard over and over that exercise helps de-stress and of course, talking and spending time with your kids. What works for you all?

I have been through a lot of training on Resiliency being an adoptive parent of an older child. Our training on this was required by our agency, thank goodness. In that setting we first learned that resiliency is something we are often born with, a natural thing, a DNA identified gene that about 75% of us are born with, so most of us have some organic dose (usually one of the two halves of the gene). This type of resiliency is evidenced by how well we bonded with our parents as infants, how we bounce back after failure, how we respond to upset/loss, or how we process a traumatic experience, maintain relationships etc.. This gene is also believed to help determine the vulnerability toward substance dependence or abuse- interestingly enough. Though the presence of resiliency is not up to us, maintaining flexibility and security is something that can be shaped and encouraged through skillful parenting/modeling. No pressure or anything :) It's an interesting thing to study, for sure, and there are lots of articles written on the subject!

I believe the State Dept/Foreign Service has done a good job screening applicants to make sure that they are resilient people before they are ever hired but that represents the applicant, not necessarily their spouse/partner or children. This where these seminars come in handy, I suppose. Frankly, I think our family's stress coping habits might need a little tweaking, which will require more than a seminar and a handout.

Posted by McKeatings at 9:57 AM