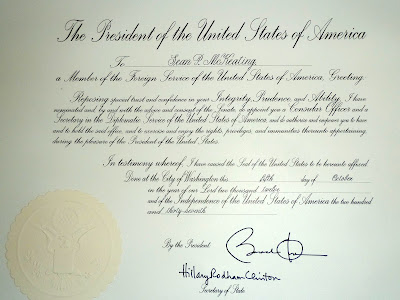 Somehow in the battles and shuffles between the different departments of our government since the founding, the State Department ended up being the guardian of the Great Seal of the United States. I have seen the contraption, used to place a big sticker-like thing (the yellow circle in the picture to the left) on official documents executed in the name of the United States. You know, things like treaties or, in my case, commissions for Foreign Service Officers!

A classmate of mine that is working at Main State sent out an email that he saw people using the seal and stopped to look in, only to see a commission for one of our A-100 classmates. So we knew these were coming, but it was still very cool. When I went to pick up mine, the folks in personnel said congratulations. I worried I would drop it on the Metro tracks or have it blow out of my hands on the way home. I managed to make it home without incident.

President Obama and Secretary Clinton's autopens signed the thing, and speaking as a nerd I have to say I find it very cool. I don't think either of them know that they have placed "...special trust in my Integrity, Prudence, and Ability..." but it's pretty neat having a piece of parchment that says so.

Seeing it helps put things like months more of language training in perspective, as I can see where the tedium today is a means to be able to act as a Consular Officer and Secretary in the Diplomatic Service in Jakarta next year.