100 MPH in the Wrong Direction 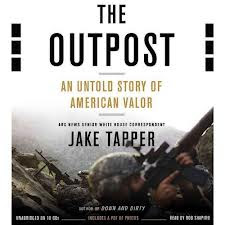 If you would like to read a straightforward account of combat in Afghanistan, I highly recommend the book pictured to the left. I tells the story of various units as they rotated through a ridiculously difficult to defend outpost in NE Afghanistan.

This is not the book for you if you want your war stories in one of the following varieties: John Wayne stories about noble American troops always outsmarting and defeating their ignorant and immoral foes, or Vietnam War-type stories about our horrible soldiers who put babies to death in service of a war for oil or for votes.

Instead, guys with lives outside the service who are educated and dedicated are doing the best they can with what they have in service of a strategy that many recognize as misguided but over which they have no control. They aren't saints, they are professionals. Many have a love and respect for the local culture that begins to show results. These are the ones targeted most by the enemy who know that connections between the populace and our military would be the death of them.

The conundrum that lies at the heart of the book for me is that every time the soldiers at post use their initiative, intelligence and pride to overcome the shortcomings of a bad strategy, they only sustain the use of that bad strategy. After all, it can't be all wrong because look what our soldiers have achieved! That's what I mean when I say 100mph in the wrong direction. Our guys on the ground were working so hard to do their best, and they did, but every setback and death is, in the end, fruitless because the strategy itself cannot be overcome by our excellent tactics.

We had one of these at State recently, too. Here I am talking about Benghazi, and the results of the internal investigation. Because Ambassador Stevens was The Man when it came to Benghazi, he was less questioned in his decisions than most. After all, if someone had a question about anything in Libya, it was him they would ask.

The facility there was not up to the security risks that were present. But each team of Regional Security Officers (RSO's) would do everything they could to help upgrade security. What they really needed to do was evacuate the building when bad stuff happened earlier in the year and actually build a Consulate with the proper security measures. But that wasn't happening, so each guy did the best they could with what they had. And every success they had only made those who put the strategy in place more complacent. 100 mph of hard work by RSO's in the wrong direction of trying to make the facility safer when what they really needed was a new facility.

Do I have the magic strategy 8-ball that will fix all this? No, I don't. I just wish buildings, combat outposts, and other stuff didn't have to be named after dedicated members of the military and foreign service after their deaths in order to fix strategy problems, and I really wish their efforts to overcome  bad strategy with good tactics didn't result in a continuation of bad strategy.