We've arrived at post! I would say things are going quite well so far. Jakarta is a very busy modern city. Getting around is tricky but there is a lot to see and do. The people are awesome, the food is good (and I was worried) and the temperature is cooler then I had assumed it would be primarily because it has been raining more than we expected.

We have been here for two weeks now but just moved into our housing today. We are very excited to finally be in our new place. Going the first couple of weeks without wifi was almost as difficult as being on a no carb diet!

In our first week we had lots of excitement but almost immediately I made a "welcome to reality" language blunder. The first morning that we woke up in Jakarta I needed to explain to our gate guard that my friend was coming to bring me some Rupiah (Indonesian currency). I needed to let him know so that he would allow her to enter when she arrived. So, in a moment of courage and good hearted ignorance, I tried to explain the plans but I could tell something had gone suddenly awry. As I spoke the young man seemed suddenly disturbed, his body language changed from a listening stance to a defensive/concerned look. I knew I had made an error and tried again - reusing the same words. After no marked improvement in his response it was clear to me that I had made a mistake.  I started over again, this time adding a few more words here and there. Apparently he understood because a few minutes later my sponsor popped in, no problem with the guard was mentioned, thank goodness.  Later that evening, I told Sean the story and he asked me to repeat what I had said to the guard. I did. Sean roared in laughter and said, "Oh honey, do you realize what you actually said? You basically asked the young man to be your friend and give you money!" He laughed harder still and said, "Then.... You asked him to please come inside!"
Oooohhhh the shame. Complete and total fail. I never wanted to leave the house again. So, please  learn from my mistake and get your second and third person pronouns correct! It makes a big difference.

Other than that and a few fights with intestinal parasites, we're doing great! 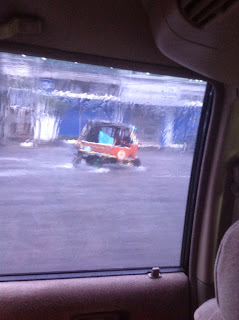